Too Holy to touch? 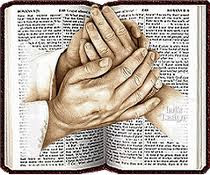 A woman that I know recently bought The Message version of the Bible. She’s been growing spiritually and has been excited about practicing the presence of Jesus in all aspects of her life. She wondered this week about the fact that she has difficulty actually opening the Bible and reading in it. In fact, seeing it on her bedside stand intimidated her so she hid it in the drawer. She was sad about this but couldn’t figure out why this was so.

I mentioned to her that I’d written a blog awhile ago about how much my old Bible has become an old friend that I cannot part with because it’s underlinings tell the story of my journey with God. Fear struck into her at the thought of marking the Bible…as though this ‘book’ is too sacred to mark up. This kind of reaction had not even occurred to me when I wrote the post but I can fully understand where it came from for her.

As we spoke further she realized that this belief is related to her upbringing…similar to how she thought in the past that she couldn’t talk to God directly, that she had to go through a priest. Prior to this, she would have said that her religious background played very little of a role in her life but this conversation made her realize that it had in fact impacted her greatly. Her reaction to my revelation about my Bible brought back some memories for her.

As a child she was an altar girl in her church…

The Bible was big…it was gold…it had its own altar. The altar girls washed their hands thoroughly before even going anywhere near it. It got ‘incensed’ and was put in a little window until it was opened by the father. One didn’t just put it on ones lap and flip through it. It needed a shrine.

As she spoke she realized that this is why the sight of her Bible beside her bed intimidates her. This scene plays in the back of her mind when she sees it there. Then she doesn’t feel worthy to go near it, much less to read it on her own. She wonders how she got this far in life without the realization that the Bible is a book that anyone can touch and be near…and read…without the pomp and circumstance. She is intrigued by the realization of this long held belief and is still processing it.

The thought of marking it up still is not something that she can picture herself doing in the near future.

I’ve had the privilege of watching her grow in her personal relationship with God over the past year, and I’ve listened to how much she enjoys recognizing His presence in every detail of her life. So I have no doubt that she will soon hold The Message on her lap and regularly read it for herself since this is her desire. I look forward to hearing about how the Holy Spirit breathes life into the words of this 'book' for her...
Posted by Hellen