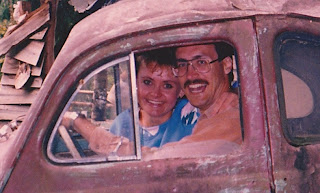 Twenty years ago today a very special man left this world. His name is Rudy and he entered my life when I had just left an unhealthy on again/off again relationship that I’d been in throughout my 20’s.

He had a gentle laid back unpretentious personality with an inquisitive nature. He would travel a great distance to churches that had pipe organs so that he could play them. He loved nature and he taught me to see beauty in so many things when we went on walks. He cooked me some wonderful meals (the way to a not-so-domestic girls heart. ;) )

He knew all sides of me but cared about me anyway…and he met me when I was still pretty crusty. When others put me down or were hard on me he had such a way of picking me up and affirming me in the exact area where they’d hurt me. He had my back, he cheered me on.

From him, I received respect that I’d not had before from a man. When he was planning to leave his dental practice to pursue a different career he took me out for dinner at a fancy restaurant to tell me about it so that I wouldn’t hear it from someone else first. He was the first man that I told about my childhood sexual abuse and, while I feared it would alienate him, it made us closer instead.

Even after he died, he made me feel valued when I found out that he left money to me in his will. And his parents further made me feel so special when they mailed me what was left in his estate after everything was settled…feeling that he would want me to have it. Although I’d have much rather had him alive, this gift came while I was doing my degree and helped tremendously. 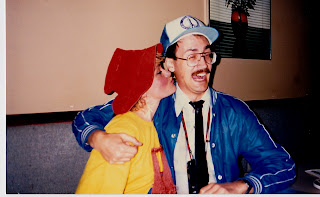 (This picture was taken after a tacky tourist party we had. Rudy used this as his Christmas card photo that year.)

He also wasn’t very handy. One day he offered to come over to help me with the lawn mower…so nice of him to offer…but I knew more about it than he did. 
And he was clumsy…if anyone were to sit on the one chair in the room that was about to break and crumple to the floor, it would be him.Which reminds me…if either of us did something stupid in a group of people we could look at the other and see acceptance there…and that made it okay.

He was a special guy. And...especially on an anniversary date like today…I still miss him.