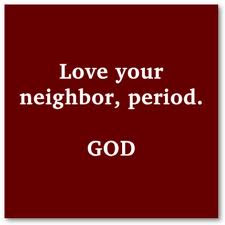 If you've read my blog at all, you will know that I talk alot about love. That's because the Great Commandment is summed up in LOVING GOD AND LOVING OTHERS...The Message translation of the Bible says:

"These two commands are pegs; EVERYTHING in God's Law and the Prophets hangs from them."

As I said in my previous blog, our cities could be transformed if Christians would simply live out the second half of the Great Commandment. Earlier this week in a blog post called 'church in the neighborhood' the blog's author, Leonard Hjalmarson, wrote the following:

In January of 2009 a group of pastors gathered to think and dream about what it would look like for the churches in their area to come together to serve the community. They asked the mayor to join them and talk about his dream for the city. They also asked him to talk about hindrances to that dream coming true.

He came with a list of pervasive issues and problems: at-risk kids; elderly shut-ins; decaying housing; hunger and homelessness. Before he started speaking he shared this: “it occurred to me that what our city really needs are good neighbors. The majority of the issues we face would be eliminated or drastically reduced if we could just become a community of people who are great neighbors.”

The pastors left convicted. Here they were asking the mayor what areas of the city were most in need, and he was telling them that the city could be transformed if Christians would simply live out the second half of the Great Commandment.

Hmmmm...'nuff said? I know, I know...there's the big question of 'Who is my neighbor?' I'm thinking that if we need to split hairs about that then perhaps we are not loving them.

Lord, give us an ever increasing awareness of what it means to love them in concrete ways.