No, no…I’m not giving it to anyone.

The middle finger on my right hand is part of what makes me unique.

When I was very young, my parents, together with an aunt and uncle, owned a general store. The kind of general store that you’d see on Little House on the Prairie perhaps. Our home was attached to the back of the store.

On the yard, we had a power generator.

I’ve always been a curious person. I’ve always needed to try to figure things out.

It may not have been the smartest thing to do but remember that I was young. I was at an age where I had no ability yet for cause and effect thinking. I remember being taken to the doctor’s after but  I have no actual memory of what I did.

It appears during the exploration of the generator  I stuck my fingers in the gears.

The tip of my middle finger partially detached and I lost the nail. The tip was reattached but that finger is about a quarter of an inch longer than that same finger on the other side.
When the nail grew back it was rough and it had split. Since then I have 2 nails growing on it. The top nail usually stays attached about half way down and then I have to cut it right back to the cuticle.

The way I learned to tell right and left was by my middle fingers. Rough nail, right side. Smooth nail, left side. To this day I subconsciously think of my middle finger when I’m thinking of directions.

Once for a wedding that I was in I had an acrylic nail put on it. It was a little disconcerting for me to not feel the ridges on that nail.

Why is that finger and nail on my mind? What’s the reason for me telling you about all this?  Well, for this first time in all the years since this event happened (and the years are many) the upper nail has not detached. It has almost reached the full length of the lower nail and although I can see a small air pocket underneath one area it is still fully attached.

Small detail to you perhaps….but there you have it.

And now you know…one small part of my uniqueness. 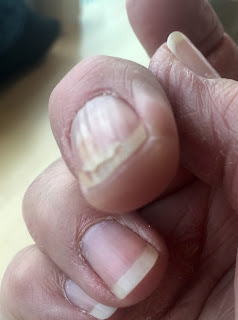